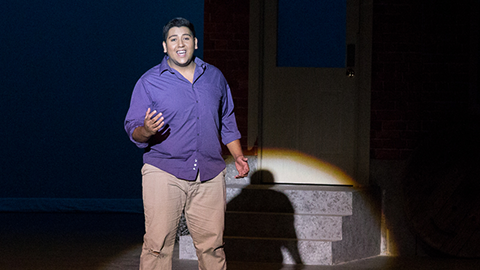 Palo Alto College music student Alexander Montalvo has been selected for the Young Adult Honors Performance Series at Carnegie Hall, a program created to showcase accomplished young performers on an international level by allowing them to study under master conductors and perform in the celebrated venue, Carnegie Hall. Participation is limited to the highest-rated 18- to 25-year-old vocalists from around the world.

“It is a great honor to have been chosen as a finalist for the Young Adult Honors Performance Series at Carnegie Hall and represent San Antonio and Palo Alto College” said Montalvo in response to his selection as a finalist. “As I said in my application, this started off as a young Latino boy’s dream on the southside of San Antonio.”

Montalvo has studied music for four years and is a member of Palo Alto Concert Choir. He is currently a second-year music student at Palo Alto College, part of the Alamo Colleges District, and he studies under faculty member Edlyn de Oliveira. He was recently seen as Tony in Teatro Palo Alto’s 2017 production of “West Side Story.”

“My dream of becoming an opera singer became a reality in 2005 when I made my Carnegie Hall debut as a soloist. At that time, I never would have dreamt I’d have the opportunity to educate and inspire my own student in the same way. It’s highlight for me professionally as an educator to see that dream come full circle,” said de Oliveira. “Alex is an incredibly talented and driven young tenor, and I have no doubt that his future holds great promise.”

Montalvo auditioned for the Honors Performance Series earlier this year and was accepted after a review by the Honors Selection Board. Acceptance to the elite group is a direct result of the talent, dedication, and achievements demonstrated in his application and audition recording. Montalvo will join other performers from 24 U.S. states and New Zealand for a special performance at New York City’s world-famous Carnegie Hall, a venue that marks the pinnacle of musical achievement.

“I’m still in shock that my dream to study music and become an opera performer is starting to be realized,” said Montalvo. “I am deeply grateful for this opportunity and so excited to see New York City and perform at the famed Carnegie Hall.”

Finalists will come together in New York City for five days in February. They will have the opportunity to learn from a world-renowned conductor, work with other Finalists, and get a taste of the city. The Honors Choral Performance will take place Sunday, February 4 at 2 p.m. and is open to the public. Tickets can be purchased beginning 60 days prior to the performance through the Carnegie Hall box office.