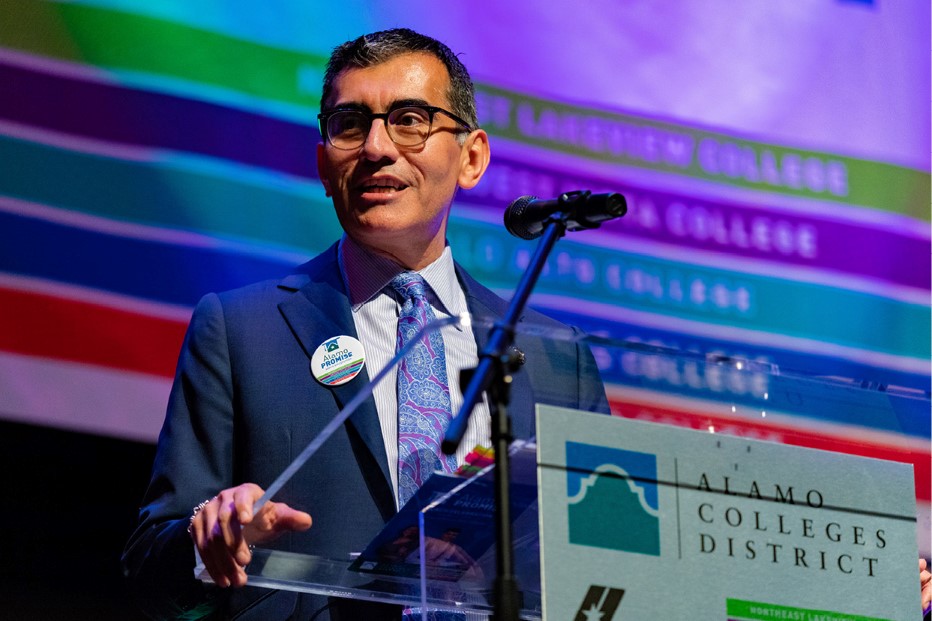 This month marks the one-year anniversary of Alamo Colleges District Chancellor Dr. Mike Flores, who has led the district and its five colleges on a whirlwind journey of innovation, celebration and success since he was named the district’s first Hispanic chancellor in 2018.

Having established a reputation for engagement and collaboration in his six years as president of Palo Alto College, he began his tenure as chancellor by visiting with students and faculty in classrooms at each of the colleges to ensure connections to the community we serve and the people who help us do it, across the Alamo Colleges family. He later hosted Conversations for the Future at the colleges to continue to hear  concerns and ideas for the future from students, faculty and staff.

“It’s hard for me to believe that I have already served one year as chancellor of the Alamo College District,” said Flores. “I am equally amazed at how much we have all accomplished collaboratively in that year. Together we have made remarkable progress toward achieving our vision of advancing the economic and social mobility of residents in our community with an eye on the larger goal of ending poverty in San Antonio through education,” he added.

Dr. Flores’ first weeks as chancellor set a dynamic pace that has continued throughout the year. At a luncheon hosted by the San Antonio Hispanic Chamber, he laid out his bold vision of ending poverty through education by ensuring economic and social mobility for all residents of the Alamo Colleges’ community. Shortly after this, he joined community leaders at a press conference celebrating the positive economic impact the Alamo Colleges District has on its students, taxpayers and community. In collaboration with a district and college-wide team, he led the Baldrige site visit and shared in celebrations at the colleges and the district when the Alamo Colleges was named as the only community college system in the nation to ever receive the Malcolm Baldrige National Quality Award. The district also was honored for the award with special recognition from U.S. Senator John Cornyn and the Bexar County Commissioners Court and received considerable media coverage locally and nationally. Dr. Flores, trustees and members of the district’s Baldrige team attended the national Baldrige conference and were presented with the actual award.

Celebrations and launches of new initiatives followed at a fast pace. Student Advocacy Centers, which include food pantries, were opened at each college to provide wraparound services and support to help students overcome life challenges and complete their education. The new Fresh Start program offered students who had attended one of the Alamo Colleges  and left owing a small balance a chance to re-enroll and graduate, with their debt paid by a scholarship. The launch of AlamoONLINE, together with a new, lower e-rate tuition for online students, put the district at the forefront of online learning in the San Antonio region.

In the midst of so much activity, a major change took place when, for the first time in the district’s nearly 75-year history, all DSO employees were housed in one location at the newly completed DSO Building at 2222 N. Alamo. The new location allows for greater engagement and collaboration within the district and between the district and the community at a central, convenient facility.

Earlier this year, the Board passed the FY20 budget, which supports the district’s vision and positions it for “Smart Growth,” making the most effective use of every dollar of revenue to support the economic and social mobility of our community and the success of our students. The budget focuses on two main areas: student support and talent support. Student support funding includes dollars for the Student Advocacy Centers, pilot health clinics at two colleges and AlamoPROMISE. Talent support includes a new minimum living wage to provide greater economic security for the district’s lowest paid employees, plus a general wage increase of 3% and stipends to maintain market competitiveness in high-wage, high demand job programs.

With the new budget in place, the district launched AlamoPROMISE, a program which Dr. Flores had championed since becoming chancellor, and which became a reality thanks to dedication, hard work and collaboration by the district and the colleges, as well as our community and business partners, including local ISD’s. Launch events have taken place and are continuing at high schools across the city, with more than 1,600 students who have signed up to “Save Your Seat” at one of the district’s colleges.

Shaped by Dr. Flores’ and the board’s commitment to collaboration, the district also updated its Strategic Plan—Our Voices. Our Vision. Our Plan, with input from 1,300 students, employees and community members. It will serve as a roadmap for the district’s future progress and continued success.

Wrapping up a year of so many shared successes, the district was honored by the Hispanic Association of Colleges and Universities (HACU) with the national 2019 Outstanding HACU-Member Institution award. This recognition acknowledges the Alamo Colleges District’s commitment  to providing access to all residents of its diverse community and providing student excellence in education which enables the social and economic mobility Dr. Flores spoke of from the beginning of his service as chancellor.

Dr. Flores’ first year as chancellor has been a resounding success, and the next year will no doubt see the district and the colleges achieve even greater success and recognition as it continue to strive to be the best in the nation in student success and performance excellence.

To learn more about Chancellor Dr. Mike Flores and stay up-to-date on his initiatives and efforts, please visit https://www.alamo.edu/about-us/leadership/chancellor/.