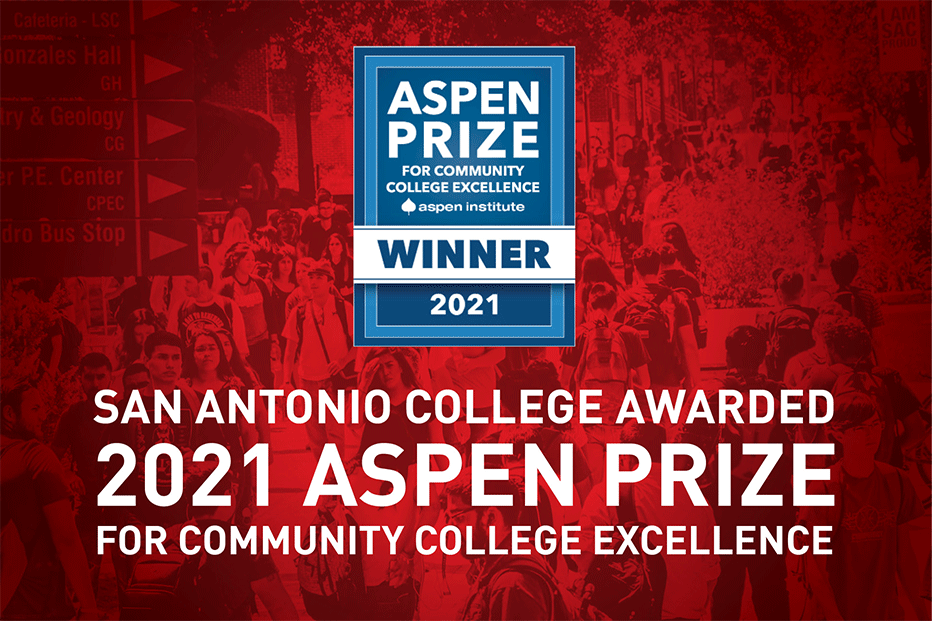 The Aspen Institute’s College Excellence Program recently announced that Alamo Colleges - San Antonio College (SAC) is the winner of the 2021 Aspen Prize for Community College Excellence, the nation’s signature recognition of high achievement and performance among America’s community colleges. SAC is the first community college in Texas to win the award. As winner of the Aspen Prize, San Antonio College will receive $600,000.

"The Board and all of us in the Alamo Colleges District family are so proud of San Antonio College being named the number one community college in the nation. Congratulations to Dr. Vela and the entire SAC family," said Dr. Mike Flores, chancellor of the Alamo Colleges. "They are the first of our colleges to win this prestigious national honor and one of three named to the Aspen Top 150 community colleges this year, along with Northwest Vista College and Palo Alto College. In 2019, four of our five colleges were named to the Aspen Top 100, the same year Palo Alto College was named in the top one percent of community colleges and a Rising Star by the Aspen Institute's College Excellence Program,” he added.

“This is the highest national honor that a community college can receive. Today’s news makes me proud, happy and just about every good feeling you can imagine,” said SAC President Dr. Robert Vela. “It’s a breathtaking achievement for our faculty, staff and students, and it embodies the very best of everyone who worked so hard to make it happen,” he added.

The Aspen Prize is a testament not only to SAC’s achievements in student success but those of all the Alamo Colleges.

The district’s numbers tell the story:

The Aspen Prize, awarded every two years since 2011, recognizes outstanding institutions selected from a pool of more than 1,000 community colleges nationwide. With a singular focus on student success, the Aspen Prize honors institutions with outstanding achievement in six areas which align closely with the Alamo Colleges District’s strategic goals and evidence of student success, as measured by its key performance indicators.