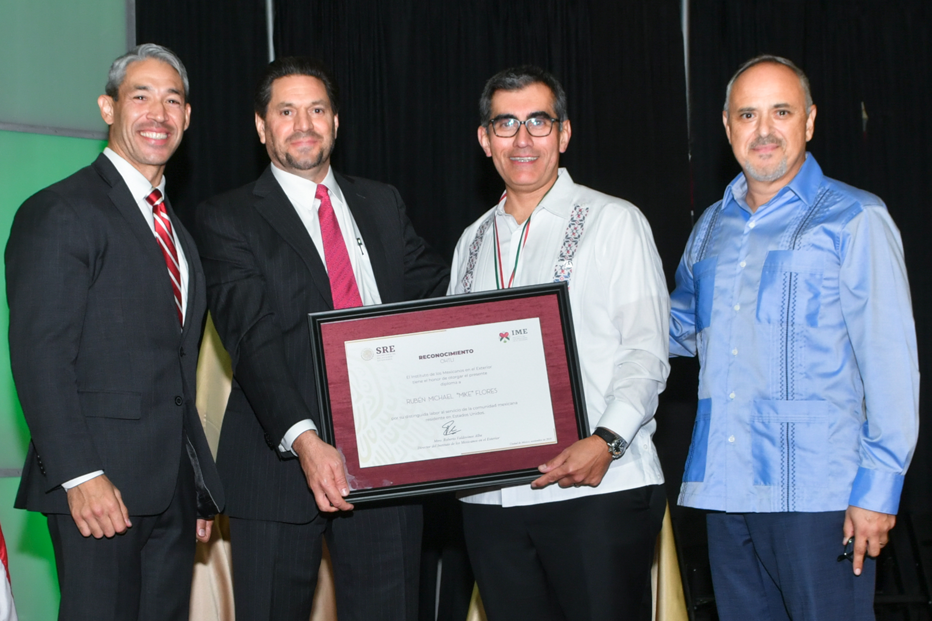 To honor his career of empowering diverse communities for success, Alamo Colleges District Chancellor Dr. Mike Flores was presented with the Ohtili Award from the Consulate General of Mexico.

The Ohtli recognition is one of the most prestigious awards given by a federal figure in the Mexican government. The award celebrates and acknowledges the value of the altruistic activities the person engages in on a constant basis, to promote the well-being of fellow Mexicans.
"Ohtli" is the Nahuatl for path and alludes to the idea of opening paths for others.

While accepting the honor, Dr. Flores talked about the great significance of the award to him as a third-generation Mexican American, a gift that he says he doesn’t take lightly as he raises his two daughters, alongside his wife.
Flores went on to thank his parents whose lives inspired him to realize who he was and how far he could go but most importantly shaped his belief to always give a voice to those who need it.

“As you can see growing up I was taught and experienced the struggle and successes of Mexican Americans. My father was able to go to college and graduate school through the GI Bill,” he said during his speech.

“He was a proud Mexicano, a proud Texano and a proud American who served as a United States Marine. He retired as a dean from San Antonio College after 28 years of working to provide opportunities to students who looked like him. My mother attended college after she had me. She is a licensed social worker and her life has been dedicated to helping those who have struggled with dependency regain control of their lives.”

Flores assumed the role of chancellor of the Alamo Colleges District on Oct. 1, 2018. With more than 20 years of service to the district, Flores possesses the distinction of being the first Hispanic chancellor in the district’s history.

Flores accepted the award on the date which would have marked his father’s 82nd birthday.