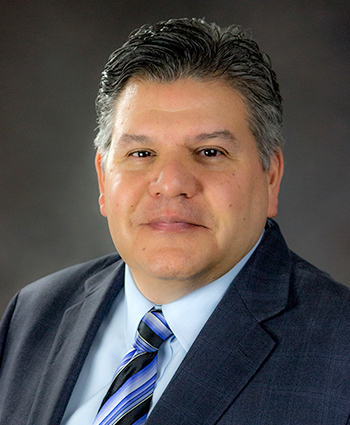 Reporting to the Vice President of College Services, the Dean of Performance Excellence is responsible for the Offices of Institutional Research and Effectiveness and Measurement and Evaluation.

Solis has been with San Antonio College for 17 years, most recently as the Director of Learning Assessment and Review in the Integrated Planning and Performance Excellence Division. In this position, he worked closely with college leadership to design, implement, and carry out the operational assessment plan (strategic plan) for the college. He also contributed to the writing and planning of SAC’s accreditation report to the Southern Association of Colleges and Schools, Committee of Colleges.

He has been a professor in the Mortuary Science Department since 1999 and has served as the program coordinator for the department.

He has also been a member of SAC’s Strategic Quality Enhancement Team since 2008.

Solis is a past president of the American Board of Funeral Service Education and is a member of the National Funeral Directors Association.

Before coming to SAC, Solis had been the Chief Financial Officer for Trevino Funeral Homes in San Antonio and was a Judge Advocate General Corps. Officer with the United States Navy at the Naval Air Station in Corpus Christi, Texas.

Solis holds a Doctorate of Jurisprudence from the University of Texas at Austin and a bachelor’s in English and Writing from St. Edward’s University in Austin. He also received an associate’s in Mortuary Science from San Antonio College.