The Koehler House is not currently avialable for hosting events. Thank you for your interest. 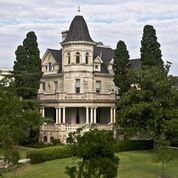 Koehler Cultural Center (acquired in 1973), 310 West Ashby Place. The Koehler Cultural Center, a gift to the College for enhancement of education in the fine arts, is designated as a Texas historical landmark by the Texas State Historical Commission. It houses the ceramics, art metals, and jewelry design studios of the Visual Arts and Technology Department and is also used as a conference and meeting location. Otto Koehler was born in Aldfeld, Hanover, Germany on April 28, 1855 and received his education in the Seminary School of Aldfeld. Immigrating to the United States in 1872, he settled in St. Louis and soon found employment with a firm of Griesedieck Brothers. Brewers. Mr. Koehler came to San Antonio in 1884 and was one of the organizers of the San Antonio Brewing Association known as the City Brewery, now Pearl Brewing Company. Early in the history of the enterprise, he became its president. He was the principal owner of the famous health resort Hot Sulphur Wells, south of San Antonio. He organized two mining operations and a rubber factory in Mexico as well as serving as president or director in fifteen different corporations. He had many associations with the city which he was proud to call his home and was a strong supporter of the Chamber of Commerce. Koehler died in 1914.

Otto A. Koehler, son of the first Otto's twin brother, made his boyhood home with his aunt and uncle, and upon Mrs. Koehler's death in 1943, he and his wife Marcia assumed ownership of the mansion. An official biography states that Koehler was born in North Warren, Pennsylvania in 1893, however, family members assert that he was actually born in Germany. He joined the Brewery in 1921, subsequently becoming chairman of the board and president of the Pearl Brewing Company. The second Otto Koehler died in 1969.

Otto and Marcia Koehler deeded the spectacular estate to the San Antonio Union Junior College District for the use as the Koehler Cultural Center in 1971.