Sam Casey, the men's basketball coach at San Antonio College, was in the middle of a treadmill workout when his phone rang with a call from Iowa. He didn't know anyone in Iowa but decided to listen to the voice mail message.

It was from Thom McDonald, a board member for the National Association of Basketball Coaches (NABC). Every year the NABC holds its annual convention in the city hosting the Final Four college basketball tournament. McDonald asked if the SAC Ranger men's basketball team would mind acting as a demonstration squad for a series of coaching clinics taking place in the Henry B. Gonzalez Convention Center.

"I called him the next day and we talked about the opportunity," recalled Casey, who added he had put out the word among coaches in the NABC that the SAC basketball team would be available. On the Tuesday after Spring Break, Casey received confirmation - the San Antonio College Ranger basketball team would play a part in the Final Four.

The clinics are a time when coaches share their basketball acumen with colleagues. For two and a half days during the convention, the Rangers basketball team worked with coaches across the country including Tim Miles from the University of Nebraska, Flor Meléndez, former coach of the Puerto Rico's basketball team, and Spurs Coach Gregg Popovich. Most of the sessions were standing room only as coaches flocked to the clinics.

"It was very intense," said Noah Phillips, SAC Ranger power forward and psychology major. "You had to really listen to the instruction and follow what they wanted us to do, step by step. It was a little bit nerve wracking but after you did it several times and got the hang of things, everything got better," said Phillips.

"Usually you will have diagrams, classrooms, handouts and weeks to practice," explained Casey. "For them to pick up on this stuff right away and then execute it in front of all these people - they did an outstanding job. "

In addition to participating in the coaches clinics, the Rangers also demonstrated ShotTracker technology. ShotTracker would put sensors on players' shoes, in the rafters of the ceiling, and in the ball itself to give real time information on game stats, such as assists, rebounds, shots made, and shots missed. The players could watch a screen and see their stats change during a scrimmage.

Although the SAC players spent a good portion of their time at the clinics, they were still able to enjoy Final Four festivities. The players were able to take in the Fan Fest, watch the slam dunk contest and the three-point contest.

Casey said his players benefitted from the clinics by getting a better understanding of the game from top tier coaches who were more than happy to take questions and offer advice.

"You can tell the coaches have a passion for what they do," added Phillips. "It was amazing." 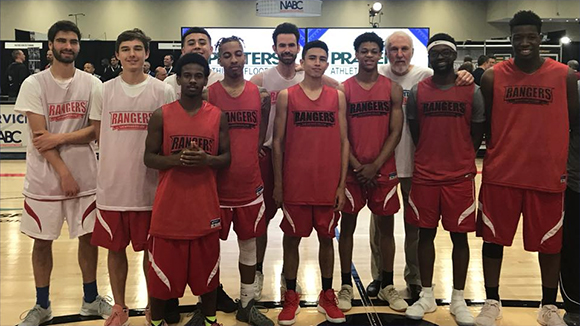