An American artist. A teacher. A political commentator. And a man of many ideas.

The smell of bleach and water transports him to his childhood years. He recalls his mom grabbing him by the ear and demanding that he clean the walls after he had just defiled them with his drawings. Eternally being called necio, a Spanish term for someone who is being naughty or foolish, Cruz Ortiz remembers being that creative child who always knew he would one day become an artist.

Now his work has received both critical and commercial acclaim.

Born in Houston, Ortiz moved to San Antonio, and later enrolled at San Antonio College. Starting right out of high school, he didn’t have the kind of supportive parents that provided him the opportunity to go to college. So, he was literally on his own and had to figure it out for himself. 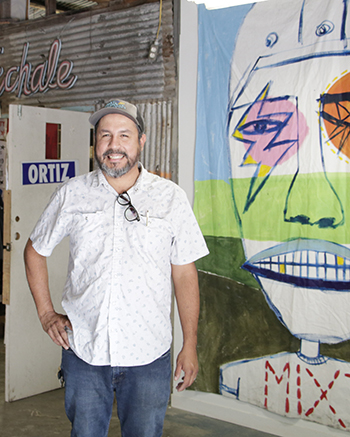 He began working full time in construction while also taking night courses at SAC. However, due to work and life, he would frequently take a class or two and drop out. Still, he loved his time at SAC and refers to it as “The Cruz Ortiz Enlightenment Period.”

Never wanting to leave the comfort of the SAC art department, Ortiz decided to transfer to UTSA after being in and out of school for nearly a decade. He chose to attend UTSA instead of an art school so he could get a broad liberal arts education and learn about economics, history, and more. Eventually, he graduated in 2000 with a bachelor of fine arts degree and a concentration in printmaking.

Before becoming a full-time artist, Ortiz taught art at the Healy Murphy Center and Robert E. Lee High School for 15 years. “I wanted to help save the world,” said Ortiz. “I thought teaching would help me get to my goal.”

Working professionally ever since his days at SAC, his art went global after he was an artist-in-residence at the Art Pace gallery, an international artist residency organization and non-profit gallery located down the street from San Antonio College.

Today, Ortiz is a celebrated artist who has had exhibits in cities all over Texas and California, and as far away as Puerto Rico, Ireland, France, Spain and England. Known for printmaking, Ortiz operates his own label and runs, along with is wife Oliva, Snake Hawk Press, a cutting-edge, boutique design firm and creative factory serving international brands such as Southwest Airlines, Red Bull, and Absolut Vodka. Ortiz also gives back to both is alma maters and has done work for UTSA and San Antonio College.

Deeply rooted in the community, Ortiz and his wife are frequently spotted around town at major festivals, political rallies, and Fiesta events. Together, they aim to reach the growing Latino and Millennial markets by providing innovative and interesting graphic design, illustration, marketing, and branding.

While he is a self-described Chicano artist, Ortiz says there is some debate among art historians if his art is actually considered “Chicano.” But Ortiz doesn’t care. He simply wants to make art.