In addition, SAC student Vincent Pequeño was selected as a National Vocal Finalist at the competition

San Antonio College’s award-winning mariachi group, Estrellas del Alamo, has added a new honor to its trophy case. SAC’s mariachis won first place in the college category at the 24th Annual Mariachi Vargas Extravaganza, the premiere mariachi event of its kind. The Extravaganza was held in November at the Lila Cockrell Theatre in San Antonio.

According to Alicia Covarrubias, director of Estrellas del Alamo, this was the second year the group entered the competition. Last year, the group won second place at the event.

The Mariachi Vargas Extravaganza consists of group competition, a vocal competition, and a songwriting competition. Hundreds of musicians and singers had attended the Extravaganza representing the finest mariachi talents from across the nation. The competition was open to high school, middle school and college troupes. It also includes instrumental and vocal workshops. 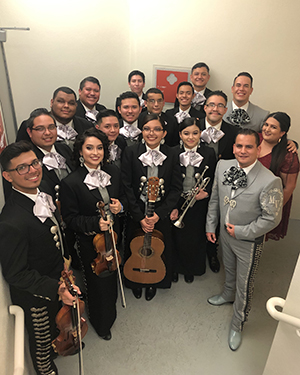 The focus of the four-day festival is the Mariachi Vargas de Tecalitlán, the most important and influential mariachi ensemble of Mexico. Founded in 1898 in southern Jalisco, Mariachi Vargas is considered the best in the world. The first-place winners in each of the group categories are awarded the opportunity to open a concert featuring the Mariachi Vargas on the last night of the event.

“The crowd really enjoyed the show,” Covarrubias said, adding “it had been years since a San Antonio group opened for Mariachi Vargas.”

Along with winning the group competition, SAC student Vincent Pequiño was also chosen as a national vocal finalist at the Mariachi Vargas Extravaganza. He participated in a vocal master class with Jonathan Palomar, a singer with Mariachi Vargas, and Pike Romero, a former member of Mariachi Sol de Mexico.

The Estrellas del Alamo will be holding auditions for new mariachis in the new year. Auditions will be held at 5 p.m. Wednesday, Jan. 16, 2019. For more information contact Alicia Covarrubias at acovarrubias14@alamo.edu