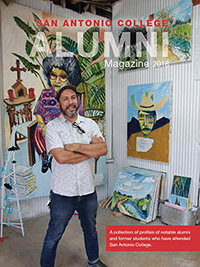 The SAC Alumni Association, with support from the Office of the President, hosted a special alumni gathering at the Victory Center on Thursday, September 27 to celebrate the launch of the new 2018 SAC Alumni Magazine.

This was the first year an event was held to celebrate the launch of the publication—now in the third year. The ceremony included several speakers and current and former alums who have been featured in this year’s and previous editions of the magazine.

SAC’s Office of Public Relations writes, photographs, and designs the magazine from beginning to end and recently won an award from the National Council of Marketing and Public Relations (NCMPR) for the 2017 edition. This year’s magazine profiles 11 individuals with a wide range of professions from an artist and an astrophysicist to a funeral director and a landscape architect.

Hard copies of the magazine are available in the SAC-PR Office located in Fletcher Administration Center, Room 317. A digital version of the publication has also been created. To learn more and to view the magazine online, alamo.edu/sac/alumni-magazine.

To learn more about the Alumni Association, visit alamo.edu/sac/alumni.