Marco Salinas, a drummer, was accepted to the International Association of Schools of Jazz summer program in Estonia 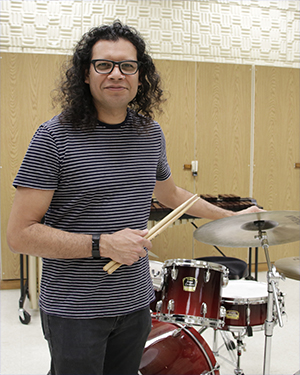 Sitting behind a drum kit in a rehearsal room on campus, SAC Student Marco Salinas begins a steady beat. He wrinkles his brow keeping time to music in his head. His hands move effortlessly as he strikes a snare drum, tom-toms, and cymbals. Soon the room is filled with a loud percussive sound that causes listeners to tap their feet and nod their heads.

For much of his life Salinas has played drums. First in middle school and high school in marching band and orchestra. Then, years later, moving to a drum kit and playing in several rock and roll bands.

Over the summer his study of the drums took a substantial leap when he participated in a program organized in Viljandi, Estonia by the International Association of Schools of Jazz (IASJ).

After years of playing the drums off and on, Salinas decided to enroll in SAC and major in music. While going to school, he auditioned for Alamo Jazz All-Stars Mentorship, known as A-Jam, a program that prepares students to participate locally and internationally in the collaborative world of jazz.

His involvement in A-Jam gave him the opportunity to successfully audition for a spot in the IASJ program. Every year the organization brings together student musicians, musicians, and instructors for an intensive study of jazz for a week in a different location from across the world. This year the IASJ held the conference and concert in Estonia. Only about 45 students were accepted to the program.

During the day, the students attended classes on different jazz topics, such as the history of Brazilian jazz, piano techniques, or chord progressions. In the evening the students would form combos and jam – playing mainly original music composed by some of the students.

The week ended with a two-night concert played inside a historic venue in Viljandi. Three groups would play the first night and three groups performed the following evening.

“The music created that week was incredible,” remembered Salinas. “I kept having to pinch myself, to make sure I was not dreaming. I couldn't believe I was performing with people from all over the world. I had the privilege to perform with students at the concert from Sweden, Latvia, Greece, Germany, Netherlands, and Argentina.”

Although he graduated in May, Salinas is taking a few courses this fall and is expecting to transfer to a university where he can pursue a bachelor’s in music. He will also continue to study the drums.