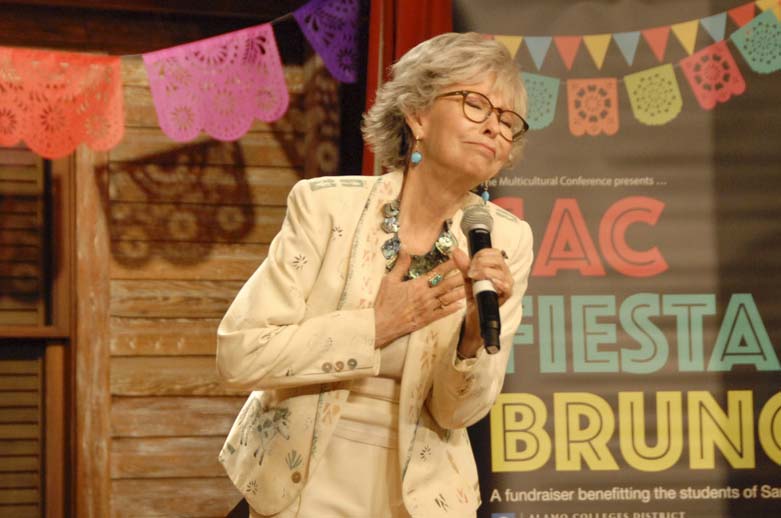 Earlier today, San Antonio College hosted the 2nd Annual SAC Fiesta Brunch to raise funds for SAC students who are at-risk of dropping out of school. The event, part of the SAC Multicultural Conference which is an official FIESTA event, was held at the Pearl Stable just north of Downtown.

Throughout her 70-year career, Moreno has collected dozens of awards. She also belongs to an elite group of 12 living performers who have won entertainment’s grand slam of the industry's most prestigious awards: The Oscar, The Emmy, The Tony and The Grammy. During her presentation, she spoke about her career, being a Latina in Hollywood, and she even gave the audience of taste of her love affair with actor Marlon Brando.

Throughout the nearly two-hour event, some 300 guests were treated to a fabulous brunch catered by Absolutely Delicious—and every attendee received a SAC fiesta medal, as well as a medal donated from Whataburger, one of the event sponsors. In addition, Whataburger donated a year supply of Whataburger to one lucky SAC student.

The Brunch had many other sponsorships from various local organizations and companies, including O’Connell Robertson who was the Champion-level sponsor.

For more information about how you can donate to the SAC President’s Fund, please contact the Office of the President at 210-486-0960.

See more photos from the event on the SAC Facebook page.