SAC Student Gets a Healthy Start Toward Career

From a young age, Gregory Lamar Torres developed a passion to help others. It began when he used to take care of his paraplegic grandmother. It continued when he became a certified nursing assistant (CNA) after he finished high school and spent two years working at the San Antonio Military Medical Center (SAMMC) at Fort Sam Houston. 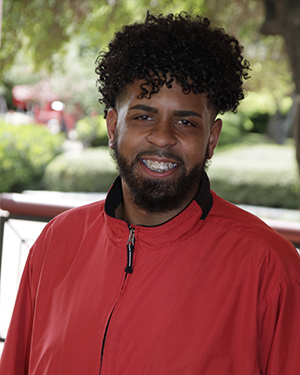 His passion also led him to leave SAMMC to become a full-time student at San Antonio College to study nursing. Now, thanks to a heartfelt talk with executives from the Methodist Healthcare System, he has been promised a nursing position and a scholarship to get a bachelor’s degree in the field.

It all came about through his role in SACMEN and his mentor, Geraldo Guerra, an academic program coordinator with the Student Learning Assistance Center (SLAC) Lab.

Earlier this academic year, SACMEN students were invited to join local business leaders to travel to the nation’s capital for the annual San Antonio Chamber of Commerce “SA to DC” trip. Guerra helped organize the trip for SAC and invited Torres to take part.

While in Washington, Torres was embedded with a group of health care professionals who spent two days talking to legislators about changes to Medicare. Between meetings, Torres shared his story of growing up in Chicago, taking a job at SAMMC and then leaving it to attend SAC.

To his surprise, one of the executives, Palmira Arellano, vice president of communications & community affairs, immediately offered Torres help. According to Torres, once he finishes his associate degree, Methodist Healthcare will pay for his RN licensing, offer him a nursing position, and help pay for his bachelor’s degree.

“It was a really great opportunity that I wasn’t really looking for. It just fell in my lap,” recalled Torres. “I am grateful for it.”

Back at SAC, Torres said he felt blessed to be part of the trip and was inspired by the generosity of Arellano and Methodist Healthcare. “It was the motivation I needed for this semester,” he said.