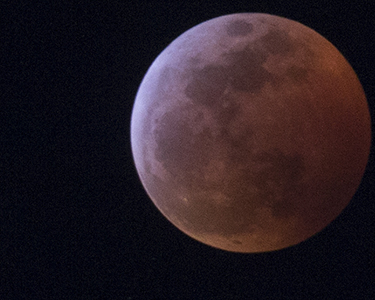 All eyes were on the skies in January to catch a rare celestial event – a total lunar eclipse that could be seen across the United States. It didn’t hurt that the event was also known as a super blood wolf moon. Super because the moon appeared larger than normal since its orbit brought it closest to Earth. Blood for the umber color the moon takes on when it passes in the Earth’s shadow. And wolf because it is the first full moon of the year.

To celebrate the lunar eclipse, the Scobee Education Center at San Antonio College organized a free watch party. The public was invited to the top of the SAC parking garage from 7:30 to 11:30 p.m. The eclipse began at 8 p.m. and reached totality at 11:12 p.m. before moving out of the Earth’s shadow.

According to Rick Varner, director of the Scobee Education Center, several organizations volunteered to help with the watch party. Members of the San Antonio Astronomical Association and the SAC astronomy program brought telescopes for an up-close view of the moon. The San Antonio Lego League joined the party and brought science-based activities for kids to participate in. The Witte Museum also had a series of activities related to “Planet Pioneers,” an exhibit that will open in early February. And food trucks from Mr. Meximus and 375 Catering parked close by in case anyone became hungry. 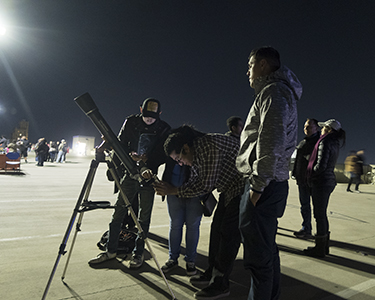 Although the temperatures were in the 40s during the lunar eclipse, about 3,000 people attended the watch party. “Most guests knew they could watch the lunar eclipse from anywhere in San Antonio, but they wanted to come together with other people interested in the event and to be able to speak with astronomers and look through telescopes,” said Varner about the turnout.

People brought their chairs and looked up into the night sky. Families formed lines to catch a glimpse from a telescope. Several people brought cameras to photograph the moon as it slowly turned deep red.

“The lunar eclipse also opened discussions on the exploration of the moon, the approaching 50th anniversary of the Apollo 11 landing in July, and our thoughts about the nickname(s) Super Blood Wolf Moon,” said Varner, recounting the conversations the Scobee staff had with the public.

By 11:15 p.m., people left the roof of the parking garage and headed home. Only a few stragglers were still around by 11:30 p.m. Everyone was gratified they witnessed the celestial event in a festive atmosphere.

It will be a while before it happens again. The next total lunar eclipse in North America will not take place until May 2021.

All photos taken at the Total Lunar Eclipse Watch Party by Russell Guerrero.