A Giant Celebration of Men Walking on the Moon

The biggest space-themed event of the summer called for a giant celebration. For the 50th anniversary of NASA’s Apollo 11 mission, which sent two astronauts on the surface of the moon, the Scobee Education Center held a day-long event that was a tribute to the moon landing as well as a catalyst to spark the imaginations of the next generation of scientists and explorers.

The event, titled “The Next Giant Step,” proved to be a popular destination in San Antonio to mark the lunar anniversary. Around 50 people lined up outside the Scobee Education Center before the doors opened and about 1,800 people, mainly families with young children, attended the celebration overall. 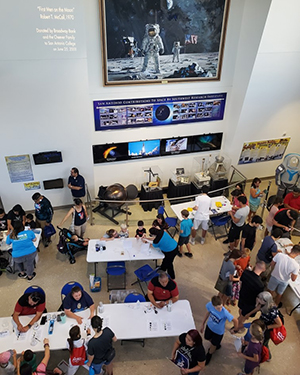 Inside, activity stations were set up across the center, some underneath a giant painting of the moon landing in the main foyer. According to Rick Varner, director of the Scobee Education Center, staff and volunteers supported ten activity stations. In addition, 15 organizations, including the San Antonio Astronomical Association, a robotics club from Louis Brandeis High School, and the Star Wars Society of San Antonio, set up their own exhibits.

Guests were invited to build rockets, lunar landers, and Lego robots. One station featured Oculus Rift gaming headsets to give viewers a virtual trip to outer space. People could also use 3D pens and scanners to make their own creations.

One of the highlights of the celebration was the showing of the short film CAPCOM Go! inside the Scobee Planetarium. The feature presented a history of the space race that led to the moon landing as well as a glimpse of future missions to Mars. Children were captivated by the movie, calling out the name of the International Space Station immediately when it came into view.

Earlier in the week, the Scobee Education Center was the subject of another future project – to bring a Challenger Center to the Dallas metropolitan area. 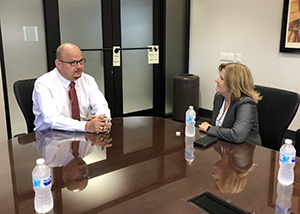 Dr. Robert Vela, President of SAC, hosted a meeting with officials from the national Challenger Center for Space Science Education in Washington with Lesa Roe, Chancellor of the University of North Texas System and a board member of the Challenger Center. The purpose of the visit was to showcase Scobee Education Center as a successful model for community outreach and STEM education.