45 Years in the Making

Jim Koenig graduated from Thomas Jefferson High School in the spring of 1963, and enrolled in San Antonio College that fall where he would continue taking courses for a decade without graduating.

Unlike today where graduating high school seniors have multiple options for higher education, SAC was the main choice for many young people in those days. And for Koenig, it was the only choice.

Interested in pursuing engineering, he was accepted to the University of Texas at Austin, but decided not to attend favoring, instead, to stay close to home. 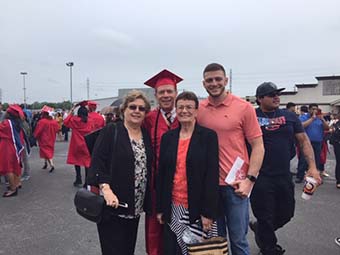 While SAC was much different back in the 1960s, Koenig’s goals were similar to those of today’s students. He wanted to get an education so that he could advance himself and his family.

There were also other advantages to attending SAC. Koenig met his future wife, Bonnie Notz, who was also a SAC student. According to Koenig, they met in the student center and fell in love. Their relationship blossomed after they showed up (separately) to a double date where both of their dates stood them up.

Newly married with a growing family, Koenig got a full-time job at City Public Service (CPS), but continued to take classes in the evenings for seven additional years. As he progressed in his career at CPS, he realized that he didn’t need to complete his degree because he only needed 85 credit hours in engineering to be qualified for the next step up the career ladder.

For 36 years, he held multiple positions at CPS ultimately becoming the Director of Utility Coordination, a title he held for 22 years. Upon retirement in 2002, Koenig began working part-time at engineering firms. Since 2018, he has been a Project Manager at Westwood PS, an engineering firm based out of Minneapolis, Minnesota.

The Road to Graduating

Highly successful in the industry, Koenig was always very active in his church and community—even serving as mayor of his town, New Berlin, Texas, for six years.

Chancellor Leslie encouraged Koenig to meet with SAC’s admissions director, Martin Ortega. Ortega conducted an audit of Koenig’s transcript and discovered that Koenig only needed two more courses to complete an associate of science in engineering degree. The two classes he needed were Texas Government and Speech Communication.

Koenig confesses he was scared he wasn’t going to remember how to be a student again. However, he claims his family, particularly his son and daughter-in-law, convinced him to go for it saying, “Dad, you lived Texas History.”

After two semesters, Koenig completed his final two courses through SAC at Northeast Lakeview College making As in both. With those two grades on his transcript, Koenig was able to walk across the stage at SAC’s 2019 Commencement Ceremony on May 11, 2019. 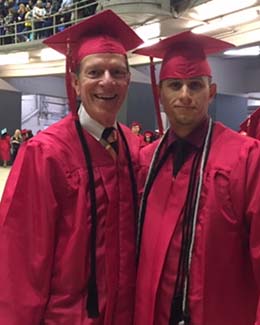 Staunch supporters of education, Koenig and his wife proudly foot the bill for their kids and grandkids to attend college.

Their daughter, a graduate of Texas Lutheran University, has been a school teacher for 30 years. Their son, president of a steel company in Houston, graduated from Southwest Texas University (now Texas State.)

And, out of the four grandkids, two have graduated college already; one is still in college; and the youngest is about to be a senior in high school.

Forty-five years after quitting school, Koenig was determined to make his family proud and to be a source of inspiration for all. “I wanted to inspire people to help them keep going,” he said.

“If you start something, finish it up.”