Radio and Television Broadcasting Professor Signs Off at SAC

After spending 37 years at San Antonio College, John Onderdonk, professor of radio and television broadcasting, is retiring. For 27 of those years, he was the faculty advisor in charge of KSYM-FM 90.1, SAC’s radio station, and in that time, he took the station from shaky ground to giving it a solid future. 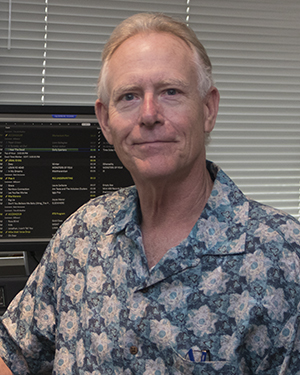 In 1992, when Onderdonk was put in charge of KSYM-FM, the station was not in the best of health. It was crammed into the glassed-in porch of the Bennet House, a turn-of-the-century home that was being used by the radio and television broadcasting program.

“The transmitter kept going down, usually around the weekend,” remembers Onderdonk. “It was approaching time for license renewal and if you don’t use your frequency, other people can apply for it.”

Onderdonk was able to get money for a new transmitter but that wasn’t enough to invest in other much needed equipment. After talking to a community DJ, Onderdonk decided to launch a pledge drive to bring in new funding.

The first pledge drive was held in 1994 and raised $3,000. Now, 25 years later, Onderdonk and KSYM-FM staff have brought in $2 million through the annual radio campaign.

The money helped pay for equipment when the station moved to their home in the Longwith Radio Television Film building several years ago. It paid for the transition from record albums to CDs to digital music. And it will help fund new renovations, including a new audio board, this summer.

Onderdonk said he was proud that he was able to reverse the fortunes of KSYM-FM. “It’s taken me a long time,” he said. “I was putting in 80-hour weeks during pledge drives. It was real intensive.”

In addition, Onderdonk has spent many of his years teaching, including courses on Radio Experience, Film History, and Television Field Production. “I really love teaching and I love teaching television,” he said. “Field production has always been my favorite thing.”

“You know I really loved teaching the students that we have,” continued Onderdonk. “I enjoyed working with the students. They deserve a good education and all the opportunities they can get.”

Onderdonk said he is looking forward to spending more time with his wife, Ellen Marshall, the former chair of Mexican American Studies, Early Childhood Studies, Sociology, Social Work and History. She retired in 2018 after 35 years at SAC.