From an early age, San Antonio College alumnus Jerry James Reyes knew he wanted to help people during the most difficult times in their lives. And he found his calling in the funeral profession. His compassion and devotion to his work has led him to a career in assisting the funerals of international royalty, actors, musicians, astronauts, and former first ladies.

“It has been an honor and a privilege in being of service to many high-profile families,” he said. “I will always be humbled and grateful for the educational foundation that I received at the San Antonio College mortuary science program.” 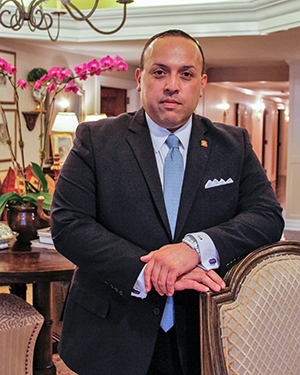 Growing up in southern New Mexico, he entered the funeral profession at 15, working for Baca’s Funeral Chapels in Las Cruces, N.M. He pursed his bachelor’s degree at New Mexico State University in Las Cruces and in 1999 he earned a bachelor’s in business administration.

Reyes then decided to shift gears and attend school for mortuary science. He began researching programs across the nation. In the fall of 2000, Reyes took a leap of faith and moved from the only home he had ever known to pursue his associate degree in mortuary science at SAC.

Reyes stayed busy. He worked full time, attended school full time and served as the vice-president of Rho Sigma Gamma Mortuary Science Community Service Fraternity. Through this student organization he became engrained in the San Antonio community. He recalls one of his favorite events was when the fraternity adopted the children of St. Peter –St. Joseph Children’s Home during the holiday season. The students coordinated a holiday party for the orphanage and took the children toys.

In 2001, with encouragement from SAC faculty, he decided to explore opportunities away from the rural life he had known in New Mexico. He first worked in El Paso for a funeral home where he received several awards for customer care.

In 2008, he left Texas and became the mortuary supervisor for the world-renowned Forest Lawn Memorial Parks & Mortuaries in Los Angeles, Calif. “I had the personal honor and privilege to be part of the team serving families from all walks of life as well as dignitaries, sports figures, members of the arts and entertainment industry, and to be part of many historic funerals,” he said.

In 2012, he moved to Houston to work at Geo. H. Lewis & Sons – The Funeral Directors, one of the most prestigious funeral firms in the nation. He is the first minority to serve as vice president and chief operating officer for the company. At Geo H. Lewis & Sons, he has had the honor of assisting on the funerals of famed Texas ranchers, oil barons, as well as the services for two former First Ladies one from the United States and another from Nicaragua.

Reyes feels fortunate to have been able to pursue his calling to help others during their time of loss and grief. “My journey has been one of experiencing amazing things and being part of many historical events and celebrating the lives of many extraordinary people,” he said.