San Antonio College architecture students took part in the 14th annual Canstruction competition – a contest to build a structure using canned food items – and walked away winners. Their work, titled “Intergalactic Energy,” was a tribute to the 50th anniversary of the Apollo 11 moon landing and featured a life-sized replica of an astronaut made holding a flag outside a lunar module.

It took almost 3,000 cans of chicken broth, soup, tomato sauce, black beans, peas, and tuna to create. For their efforts they won the “Best Use of Labels” award. 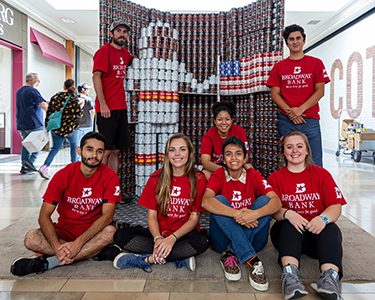 Each year, SAC students participate in the annual contest that benefits the San Antonio Food Bank. The competitors are mostly professional architecture and engineering firms from around the city. Each team constructs their creations at North Star Mall, where they remain on display for a month.

Kelli Margozewitz, an architecture major and president of the SAC chapter of the American Institute of Architecture Students (AIAS), said she first met with other students in early August to brainstorm. And while local firms had been working since May on their designs, the SAC students barely had a month to design and build their structure.

The group used a computer program to design their idea and to figure out how many canned food items would be needed and what colors the cans should be. The next step was to place an order at HEB. Funds to buy the cans, as well as other construction material, were provided by the Broadway Bank and Marmon Mok Architecture.

Once the cans arrived, the students began working on their mock up. They were not too far into building their model when they hit a major hurdle – the 1,200 cans of chicken broth they bought wouldn’t stack. The cans had to be returned and the students lost a few precious days of construction. It took several days and nights working until 10 p.m. but the students were finally ready to assemble their structure at the mall.

They arrived at 8 a.m. and worked until 3 p.m. in the afternoon. 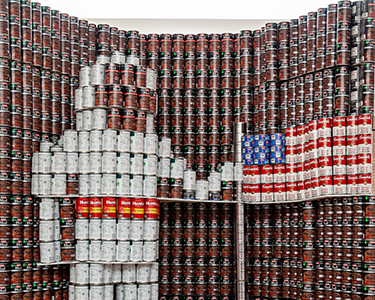 “They only allowed five people in the space at a time to build the structure,” said Margozewitz. “Other team members were unloading cans and some acted as project managers making sure the cans and the labels were perfectly facing the same direction. We were really meticulous about the placing of every can.”

Once the structure was finished, Margozewitz said the students were proud of their creation.

“We were so excited. It proved that we were able to compete with some of the strongest firms in the city. I don’t think we were necessarily expecting that. It did prove we had a good design and our hard work definitely paid off,” she said.

“Intergalactic Energy” will be on display at North Star Mall for most of September. Then the students will assemble the structure again in the Broadway Bank for a month-long exhibit. Afterwards, the cans will be donated to the Food Bank.