Sinkin Eco Centro Provides Fresh Produce to Help Those Who are Food Insecure.

It’s a warm summer morning with the threat of more heat coming soon. A group of volunteers is gathered under a carport at the Sinkin Eco Centro by pallets stacked with boxes. A line of cars and trucks slowly moves into the parking lot as each vehicle is stopped by volunteers.

From the shade of the carport, the volunteers grab 18-lb boxes filled with oranges, potatoes, carrots, beans, and apples and load them in the vehicles. Sometimes they carry a handful of boxes while at other times loading up 50 or more into a vehicle. 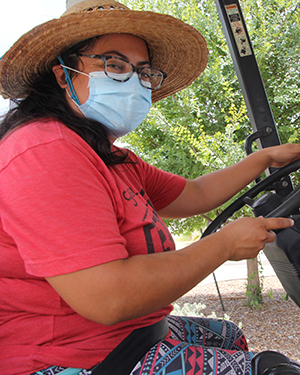 In April, Lopez reached out to DiMare Fresh, a produce distribution company with offices in Fort Worth and Houston, that was part of the Department of Agriculture’s “Farmers to Families Food Box” program. Through the government grant, the company   was distributing fresh produce to non-profit organizations in parts of Texas, Louisiana, and Oklahoma

By the end of May, the company made the Sinkin Eco Centro a central distribution point to deliver the boxes of produce in San Antonio. At least once a week this summer, an 18-wheeler would arrive in the morning packed with food.

Organizations ranging from the San Antonio Housing Authority, the Edgewood Independent School District, the Brown Berets, and the Southwest Workers Union would arrive at Sinkin Eco Centro to pick up produce to give to families. In just June and July, the Sinkin Eco Centro distributed 20,000 boxes into the community

In addition, boxes were also made available to SAC students, faculty and staff who were in need. 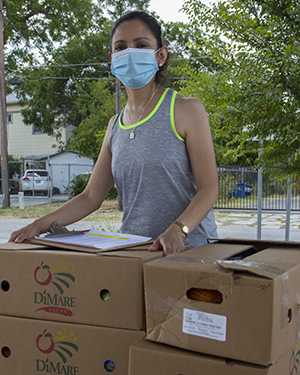 With her hair in a pony tail and wearing a mask, many may not recognize one of the volunteers is English Professor Patricia Portales, who has come weekly to the Sinkin Eco Centro throughout the summer to help distribute the food.

“It just makes you realize how many people out in San Antonio are having food security issues. You don’t realize it until you are in the middle of it, trying to get food out to people,” Lopez said.

Bottom left: Patricia Portales, professor of English, stands by a pallet of boxes waiting for the next vehicle to arrive.