San Antonio College has much to celebrate when it begins its 95th year of this fall. The college received high national rankings in two categories among community colleges for “The Top 100 Associate Degrees Conferred” published by Diverse Issues in Higher Education.

SAC was also named as one of the 2020 Top Ten Community Colleges in Texas by  Optimal.com, the national  Guide to Online Schools.

And this summer, SAC was selected as one of ten finalists for the prestigious $1 Million Aspen Prize for Community College Excellence. 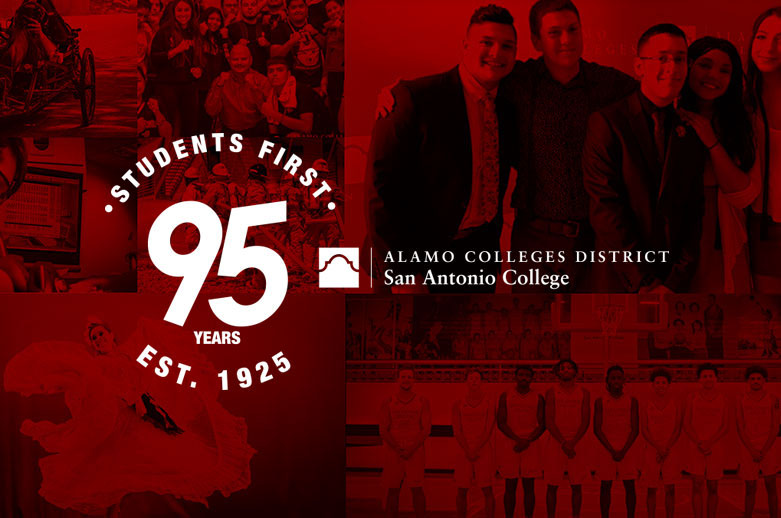 To highlight these recent honors and commemorate the college’s rich legacy, the SAC Office Marketing and Strategic Communications has created a bold new logo to celebrate our 95th anniversary. The logo will be used throughout the coming academic year to mark SAC’s accomplishments while at the same time announcing SAC’s primary mission to promote student success.

SAC’s beginnings as one of the oldest community colleges in the state go back to September 1925, when it was established as University Junior College by the University of Texas in Austin. The following year control of the college was transferred to the San Antonio Independent School District and the name was changed to San Antonio Junior College.

The college’s first offices were housed at 203 Romano Street on the northwest side of Main Avenue High School near Romano Plaza. The campus was moved in 1926 to the 400 block of South Alamo St., once home to the German-English school.

In January 1951, San Antonio College moved to its present site on San Pedro Ave. across from San Pedro Park. Enrollment was less than 500 students. The Southern Association of Colleges and Schools granted accreditation to the college in 1955.

In the mid-1960s the college expanded its mission to include vocational, technical and adult education. By the late 1960s San Antonio College became a comprehensive community college by expanding offerings in occupational and technical courses and by assuming the San Antonio Independent School District’s continuing education program.

In 1986, SAC helped found the Hispanic Association of Colleges and Universities and is designated as a Hispanic Serving Institution.

Currently SAC is one of the largest single-campus community colleges in the state and nation. The college enrolls close to 20,000 students every semester and awards more than 5,000 degrees and certificates each year.