The San Antonio College architecture program hosted the San Antonio chapter of the American Institute of Architects (AIA San Antonio) as they gave an otherworldly presentation in the Scobee Planetarium. 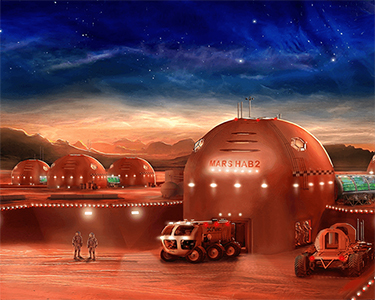 Dwayne Bohuslav, program coordinator for architecture, worked with COTE to hold the event at the planetarium, which was the perfect venue for a discussion on off-world building.

“We had a packed house,” said Bohuslav, who added that the lecture was popular with both professional architects as well as with SAC students.

According to Bohuslav, Ximenes first spoke on plans to first colonize the moon. Using robots and 3D printing techniques, habitats could be formed in lunar caves. Eventually the moon colonies would be used to launch missions to colonize Mars.

XARC Is leading the LEAP2 Consortium, an international affiliation composed of industry, academic, and government organizations working on technologies for lunar settlement.

For the second part of his presentation, Ximenes talked on how he wants to make San Antonio a hub for developing the technology needed for space architecture. He is already working with aerospace and research corporations as well as the University of Texas at San Antonio and Texas A&M University in College Station. He is also working with local middle school and high school STEM students on parts of the project.

Sultan Arican is an engineering major who is interested in space architecture. In fact, she was researching how to contact Ximenes about his company when he learned he would be speaking at the planetarium.

“After he finished his presentation, I introduced myself to him and talked to him about the things we were doing here at SAC,” said Arican.

Art Puente is an architecture major who also dreamed of taking a giant leap to build in space. “Before it felt imaginary. The presentation opened my eyes and I could see the real possibility to control robots through satellite community,” he said.

Both students were able to exchange contact information and plans were made to meet again to talk about possible research opportunities.