San Antonio College ranks among the nation’s top colleges for Latinx students, according to Hispanic Outlook on Education Magazine. The magazine released its Top 100 Colleges and Universities for Hispanics list in October.

SAC placed in the top tiers of two-year colleges in several areas based on statistics from the 2019-20 academic year. 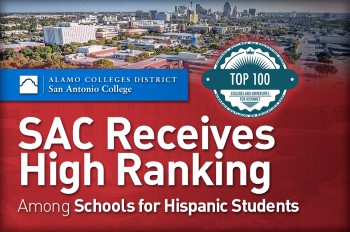 SAC is No. 11 out of 100 in Total Enrollment Two Year Schools, with other Alamo Colleges District campuses also recognized, including Northwest Vista College at No. 17, Palo Alto College at No. 30 and St. Philip’s at No. 31.

SAC enrolls about 19,000 students each fall and spring semester. Of those, 64 percent of students are Hispanic.

“With a student population that’s more than 60 percent Latinx, San Antonio College is honored to be recognized as one of the best colleges in the nation for Hispanic students,” said Dr. Robert Vela, president of SAC. “We know that when Hispanic students achieve their academic and career goals, the entire community benefits.”

SAC ranked ninth in liberal arts and sciences, general studies and humanities degrees, and was No. 22 in the country for total associate degrees granted.

The Hispanic Outlook on Education’s Top 100 list recognizes the higher education institutions across the country that enroll the highest number of Hispanic/Latinx students based on factors including the percentage of Hispanic students in attendance, total student enrollment, schools awarding the most degrees to Hispanics and the percentage of Hispanics awarded degrees. The publication focuses on issues related to Hispanic education and institutions of higher learning.