In recognition of his long and accomplished career, Meals was inducted into the San Antonio Radio Hall of Fame on April 3. 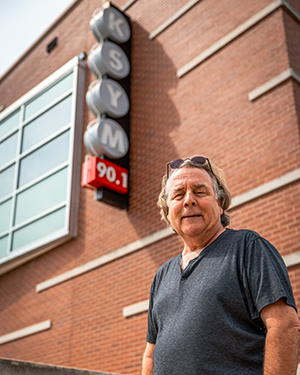 In addition to being an instructor in the college’s radio-television-broadcasting program, Meals is the faculty advisor and general manager for SAC’s radio station, KSYM. It’s a role he didn’t imagine when he started spinning records at the station as a freshman in 1975. Back then, he recalls, music was all on vinyl records and reel-to-reel tape.

That experience launched him into a career as a disc jockey in the city’s radio scene, including KISS-FM, then a pioneering, free-format station known for introducing up-and-coming heavy metal bands to the city.

“We did a lot of local music and broke bands way more than any radio stations do nowadays,” he said. “It was just a totally different approach to radio in those days.”

In addition to his DJ gigs, he took a job at a local recording studio, where he learned about producing commercials. It allowed him to work as a production director for several stations, and inspired him to build his own recording studio, Edit Point Studios, where today he produces music for local bands in his spare time.

While Meals has seen a lot of changes in the industry over the years, he keeps his focus firmly set on the future. He continuously looks for ways to innovate and expand SAC’s radio-television-broadcasting program so students get the real-world experience they need to work in the industry.

“A lot of students get in like I did because they get to play records,” he said. “But once I learned a lot more about production and radio station promotion, I was really able to grow as a professional in the industry, so I’m trying to get that kind of mindset in students beyond just having a radio show.”

He makes sure students understand that today, radio isn’t just about playing music. It’s one part of a bigger multimedia package that includes websites, social media and YouTube videos.

“A radio station for listeners is a relationship. All these other pieces of media help to foster that relationship,” he said. “It’s really good for students to get exposed to all those sides. There may be sides that they never realized were part of the industry that they may find interesting.” 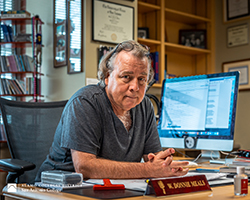 Meals’ teaching career began when he was working as a DJ in a local club and ran into one of his former instructors from SAC. When the instructor learned that Meals was studying multi-track recording, he asked him to teach it to his students. He began teaching audio production as an adjunct instructor at SAC in 1984.

Along the way he picked up video production, single-handedly recording, editing and producing his first documentary as part of his master’s thesis. The film, El Corrido, examines a form of Mexican folk music that focuses on storytelling (the film is available on Meals’ website, donniemeals.net).

“I don’t know who said it, but a quote I’ve always liked is ‘dedicate yourself to a lifetime of learning,’” he said.