Students in the radio-TV-broadcast program (RTB) at San Antonio College won three awards for their work in a national competition, including the program’s first-ever first-place award. 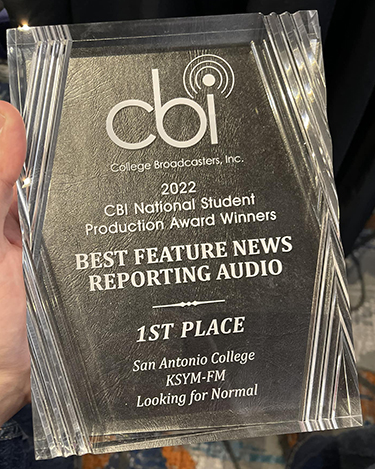 David Aleman, a sophomore and a producer on both KSYM winning entries, credits Velten with providing expert guidance to help the students create high-quality productions.

“I would say the common thread through all of those projects was definitely Mustard,” Aleman said. “He was there with us the whole way helping us out. He definitely gave us advice on what would sound better, how to phrase things, little editing tricks we didn’t know and any stuff we got hung up on.”

Aleman is a psychology major and works at KSYM in a work-study job as a production manager. In that role, he records and produces content for the station, including ads, public service announcements, and website updates.

The first-place feature news story aired in fall of 2021 and chronicled the return of live theater to SAC after pandemic lockdowns. Students staged a production of Looking for Normal, a play exploring the themes of marriage, family and acceptance. The story, which included an interview with former SAC President Dr. Robert Vela, stood apart for both its quality and subject matter, Velten said. 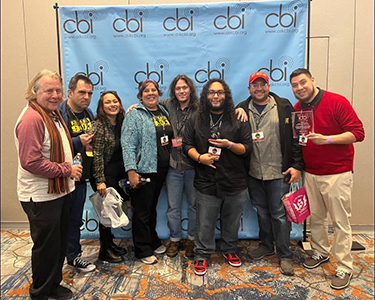 Aleman selected the guests, prepped the hosts with background information about each guest, worked with the hosts to prepare for the interviews, recorded the audio, edited the content and uploaded it onto Spotify and the KSYM website.

“It was a lot,” Aleman said. “Even though that was third place, I was almost prouder of that one.”

Velten and RTB faculty members submitted student work in 11 categories. Of those submissions, judges nominated three entries to move on to the final rounds of competition, where each placed in their respective categories.