Five members of the Society of Physics Students at San Antonio College traveled to Washington for the 2022 Physics Congress, also known as PhysCon, the largest gathering of undergraduate physics students in the United States. This year, the conference marked “100 Years of Momentum” as part of its centennial celebration. 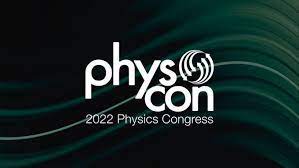 The conference, which took place in October, gave students an opportunity to learn more about physics, including academic and career opportunities from various graduate schools, national laboratories, and NASA, and to meet other physics students.

“There aren’t many physicists in the world or in the U.S., so when our students interact with like-minded, like-interested students from around the world, they feel good. It’s a motivator,” said Alfred Alaniz, professor of physics and astronomy and the faculty advisor for the Society of Physics Students.

The majority of other attendees were from four-year institutions. While it may be unusual for a community college students to attend physics conferences, Alaniz said the experience provides great benefits.

“The networking is important, and the exposure to universities, vendors, future employment opportunities,” Alaniz said. “Some students got their foot in the door for scholarships and internships, and they may have met someone they’re going to work with in the future.”

Meeting other students and learning from physicists at PhysCon was a valuable experience for Baxter, a freshman and president of SAC’s Society of Physics Students.

“I’d never thought of physics as the field I would jump into, but when I went to PhysCon, I realized this is where I want to be,” Baxter said. “This is going to give me the tools I need for the dream that I have for myself.”

SAC is one of the few community colleges nationwide with a chapter of the Society of Physics Students, a professional association open to students interested in physics and astronomy.