The San Antonio College Speech Team has won multiple awards after competing against other Texas colleges and universities in two fall tournaments.

The team won several awards in the 2022 Battle at the Alamo Swing, Oct. 22-23, which SAC co-hosted with Tyler Junior College. The tournament brought 128 students from 15 colleges and universities around Texas to the SAC campus to compete in a variety of speech categories. 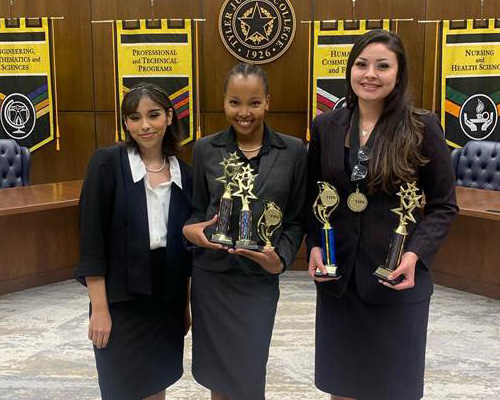 The duo won multiple awards again two weeks later at the 2022 Fall Texas Intercollegiate Forensics Association State Tournament, Nov. 5-6 in Tyler, where they went up against 125 competitors from 15 other Texas colleges and universities.

Mohloane, a sophomore majoring in psychology, is now in her second year on the team. She’s used to placing in the top finishers at speech competitions. So when she placed fifth on the first day of the state tournament, she knew she could do better. She reviewed feedback from the judges and practiced with teammates late into the evening to improve for the next day of competition.

SAC was named the 4th place overall team out of 16 other teams.

Ferson is a first-year student studying mortuary sciences. A recent addition to the team, she is focused on competing in persuasive speaking. Her topic of choice is alcohol dependency in women, how the pandemic affected the problem and ways to help.

Placing in her first-ever tournament made the hard work of preparing, memorizing, and rehearsing a 10-minute speech worth it.

“It felt really awesome to place doing a speech about a topic I was not only very passionate about but one I had worked so hard for,” Ferson said.

Mohloane, who won numerous awards as the sole speech team member last year, is focused on prose and poetry interpretation. An international student from South Africa, Mohloane focuses on cultural identity and women’s rights in her competitions.

“A lot of performances, whether they’re speeches or acting interpretive events, are about advocacy and standing up for what you believe in,” said Justin Blacklock, an instructor of speech communication and director of the team. “Whatever a student’s speech is about, they’re getting to advocate for something they believe in, so they’re always excited to compete and share their message.”

Being on the speech team is challenging but rewarding, both Mohloane and Ferson said.

"It’s made me a much stronger, much more confident speaker,” Ferson said.

Mohloane has found that the skills she’s learned on the team also help her outside of competitions.

“I’m a better communicator. I’m not afraid to share my message,” she said. “We all have different opinions, but I’m here to advocate for what I believe in. Speech and debate gave me that confidence.”

The team continues a long tradition of excellence, with a history dating back 43 years on campus. Blacklock was a member of the team as a SAC student in 2007-8 when speech professor Jolinda Ramsey was the coach.

The team is continuing to prepare for additional tournaments in the spring, including a national competition in Washington, DC in April.