A new group of students is leading the Student Government Association at San Antonio College after being sworn in earlier this semester.

In addition to addressing student concerns, officers play several important roles on campus. Vice President Emilia Gaither is part of the presidential search committee. Two officers represent SAC at the district level with student representatives from other Alamo Colleges. The officers also manage the student activity fee, overseeing a budget of half a million dollars. 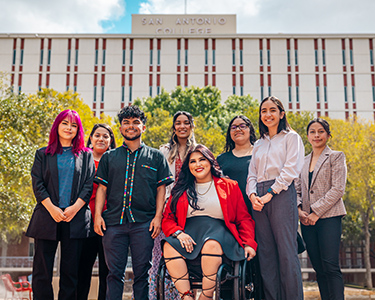 “It’s a pretty intense commitment. They are serving a student population of over 17,000 students, so there’s a lot of concerns that come their way,” said Domingo Figueroa, SGA staff advisor and student success coordinator in the Office of Student Life. “They have to meet and discuss how they’re going to carry those into action.”

The officers hold town halls one Friday each month where SAC students are invited to bring issues, concerns, or ideas. Students can also connect with the SGA by email (sac-sga@alamo.edu) or through Instagram (@SAC_SGA_).

“I really like the fact that we can take issues that the students have and bring them directly to college executives,” Acosta said.

Students apply for SGA in the spring and if selected, are appointed to the various positions.

This year’s group is leading a bipartisan effort to involve students in the election process through events on campus, including a “Get Out the Vote” rally on the SAC mall last month that helped more than 120 students register to vote.

“They’re just very dedicated. They want to ensure they’re using their platform correctly, that every concern is addressed and that they’re meeting students’ needs, so they’re very proactive,” Figueroa said. “They’re really some of the best student leaders we have on campus and within the Alamo Colleges District.”

Each member of the group has a different background, which is an asset to the campus, Figueroa said.

“I think that benefits the school and themselves tremendously because they bring in different perspectives that can help our entire demographic here at SAC,” he said. “It’s a very diverse population here at SAC, and they’re able to represent all kinds of students.”