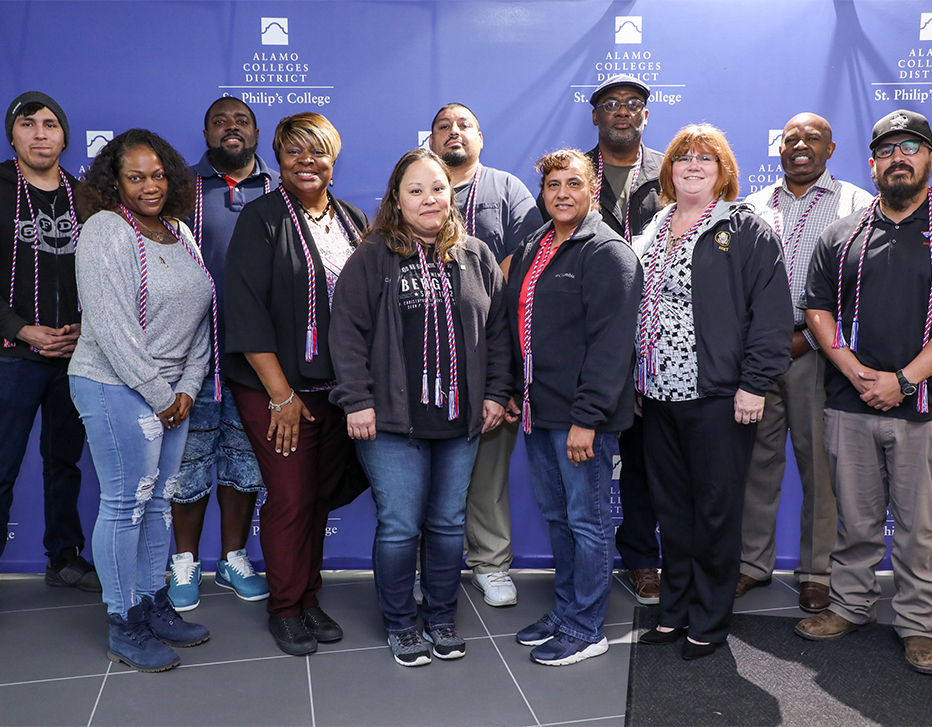 The college envisioned the event as an ideal time to honor such outstanding graduating student veterans as current sociology student Angelia Jacobs who has provided exemplary corporate leadership and corporate team building services as the college's former Student Government President and as a former Alamo Colleges District Alternate Student Trustee in the era when St. Philip’s College experienced record graduation rates, earned the elite Governor’s Award for Performance Excellence and debuted a bevy of free services for all veterans and family members through its nationally-noted St. Philip’s College Good Samaritan Veterans Outreach and Transition Center at 202 Connelly St.

Jacobs and guest students were joined at the event by veteran and current Student Government Association President Cedric Dickerson, many representatives from the St. Philip’s College Good Samaritan Veterans Outreach and Transition Center and employees who serve veterans students at college locations on local military bases.

Both Dickerson and Jacobs separately addressed the college environment for veterans when the signature national professional development training program Operation College Promise was hosted at the college in June to support veterans nationwide as they re-integrate to, through and beyond higher education.

Such events as the veterans academic accomplishment luncheon reflect what Dickerson and the graduating Jacobs envisioned for current students when they spoke as panelists during the June program.

Jacobs has been a mainstay at many of the college’s graduation ceremonies, and Dickerson will ceremonially participate in Jacobs’ graduation when the college holds its 140th Commencement ceremony Dec. 14 at 7 p.m. in Freeman Coliseum at 3201 E. Houston St.

One of the many student success highlights Jacobs has viewed during several ceremonies is a five-year-old tradition---the awarding of St. Philip’s College regalia in the form of a red-white-and-blue cord adornment to honor the college’s special population of degree and certificate candidates who are veterans of service in the armed forces.

The cords have traditionally been provided informally as students are issued caps and gowns. To express more profound thanks to the veteran students while building team consciousness for what the cords represent, several cords were presented to students during the conclusion of the Dec. 6 recognition program.

In her capacity as the senior coordinator of student success within the college's Veterans Affairs Office, Veronica Griego is familiar with the journeys of the college's veterans and their families, and is always improving recognition for their service. She was the lead organizer for the event.

"Each year it will grow, but for this first one we had a welcome and a lunch, for veterans and their family members. Family members are a key part of veterans achieving this goal. We had over 60 graduating veterans who qualified this December, and we will distribute the remaining cords on graduation day," said Griego.

To join the conversation or support the deployment of new recognition initiatives for all student veterans at St. Philip’s College, contact the college veterans affairs team at spc-vetaffairs@alamo.edu and visit their web page. To view the latest group of veterans to wear the cord, visit the free 140th Commencement ceremony Dec. 14 at 7 p.m. in Freeman Coliseum at 3201 E. Houston St.