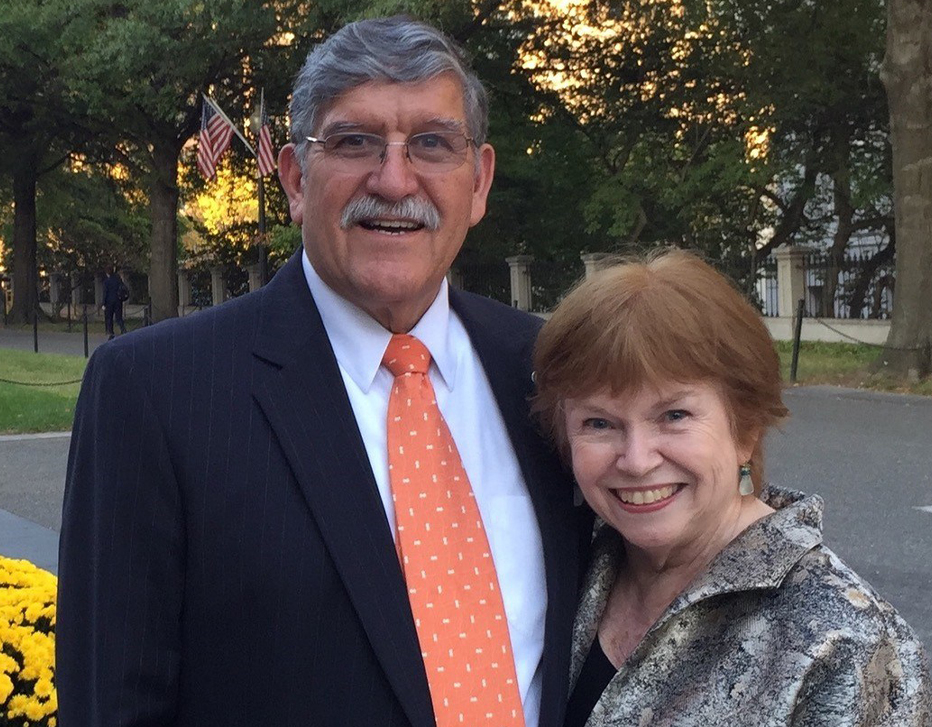 Dr. Ricardo Romo and Dr. Harriett Romo celebrate a lifetime of philanthropy with the gallery opening of the Romo Collection.

On September 26, 2019, St. Philip’s College will celebrate Hispanic Heritage Month with the debut of the Romo Collection of Art Exhibit. The gallery opening will take place in the Morgan Gallery in the Watson Fine Arts Center (WFAC) at 11 a.m.

Dr. Ricardo and Dr. Harriett Romo gifted 200 pieces, including 80 prints, to St. Philip’s College’s permanent collection. 17 of those works are part of the gallery exhibit and celebrate the history of the Romo family.

Ricardo Romo grew up in San Antonio’s Guadalupe community and Prospect Hill. A graduate of Fox Tech High School, he attended the University of Texas at Austin on a track scholarship. He earned All-American honors in track and was the first Texan to run the mile in less than four minutes.

Romo earned his B.S. degree at UT Austin; a master’s degree in history from Loyola Marymount University (1970); and a Ph.D. in history from UCLA (1975). A nationally-respected urban historian, Romo is the author of “East Los Angeles: History of a Barrio,” now in its ninth printing (one in Spanish).

Romo served as the fifth president of the University of Texas at San Antonio from 1999 to 2017.

A historian of note, Dr. Romo has taught and published in the field of civil rights, Mexican American history, and urban history. He currently serves as a Director for numerous boards including Southwest Research Institute, Brackenridge Conservancy, Humanities Texas and World Affairs Council.

He is also active as a cultural and political writer as well as an editorial board member for La Prensa Texas. Romo’s photos have been included in numerous regional exhibits including “Havana” and "Small Town Texas," and an exhibit in China, “Infinite Horizons: Visions of Texas.”

Ricardo and his wife Harriett are avid collectors of Latino art and active in several Texas museums. Over the past 20 years, they have donated nearly 2,000 Latino art prints and paintings to a dozen museums, including:

Harriettt Romo was born in Alexandria, Louisiana but grew up in Pasadena, Texas, where she graduated from South Houston High School. She attended The University of Texas at Austin and earned her bachelor’s degree in education. She is a first-generation college student and attended college on the War Orphan’s Benefits component of the G.I. Bill because her father was killed in World War II.

Her first teaching job was at the American-Nicaraguan School in Managua, Nicaragua. She married Ricardo Romo, whom she met as an undergraduate at UT Austin. They have been married for 52 years and have two children -- Anadelia Romo, a history professor at Texas State University, and Carlos Romo, an attorney in Denver, Colo. They have five grandchildren.

In California, Harriett worked for the National Origin Desegregation Center at San Diego State University and taught there while assisting school districts throughout southern California to develop programs for English learners.

Upon completing her Ph.D. and returning to Texas, Dr. Romo directed a Ford Foundation project for the InterUniversity Program for Latino Research based at UT Austin. After a post-doctoral fellowship at Stanford University, she taught at Texas State University from 1990 to 1996 before returning to UT Austin as a professor in the College of Education. While at UT Austin, she published the book, “Latino High School Graduation,” which was a finalist for the C. Wright Mills sociology award for research of value to the community.

In 1999, she moved to the University of Texas at San Antonio, where she taught sociology courses, directed the UTSA Mexico Center, and initiated and directed the UTSA Child and Adolescent Policy Research Institute.

During her 20 year career at UTSA, Dr. ROmo received grants from the U.S. Department of Housing and Urban Development (HUD) to study the impact of affordable housing on college access for youth transitioning out of the foster care system and to document the impact of the Eagle Ford Shale oil and gas exploration in South Texas on affordable housing.

As Director of the UTSA Mexico Center, Harriett organized academic conferences on immigration, border culture, health issues, and education and published seven books with colleagues from UTSA and Mexican universities. She was nominated and selected to participate in a committee at the National Academies of Sciences, Engineering and Medicine, Division of Behavioral and Social Sciences and Education based in Washington, D.C. from 2015-2017.

This resulted in the publication, “Fostering School Success for English Learners: Toward New Directions in Policy, Practice, and Research.” Dr. Romo has successfully written grant proposals for $11.2 million from national foundations, federal agencies and local funders. This has included prestigious grants from the Mellon Foundation and the U.S. Department of Education for undergraduate students from underrepresented backgrounds to pursue graduate studies.

Other grants funded research on early reading for Head Start children, improving the quality of teaching in Head Start programs, infant language acquisition in bilingual homes, racial and ethnic relations in the United States, and the experiences of Mexican immigrant entrepreneurs.

After a 53-year career in various aspects of education, Harriett retired in 2019. She plans to continue volunteer work as a McNay Art Museum board member and assisting other non-profit organizations.

The Romos have collected Mexican American and Mexican art for decades and are celebrated for their artistic philanthropy.