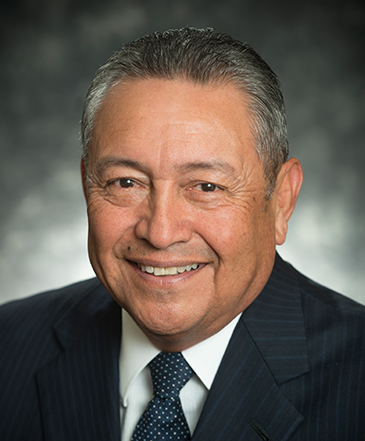 Roberto Zárate, Alamo Colleges Trustee District 5, is a retired educator with more than 36 years experience. He has served on the Alamo Colleges' board for 13 years, since he was appointed to the District 5 seat in August 2003. He was subsequently elected to the seat in May 2004, and was most recently reelected in May 2012 to serve until May 2018. He was elected chair of the Alamo Colleges board from 2006 to 2008, and also has held positions as secretary, vice-chair and chair of the Academic Accountability and Student Success committee. He currently chairs the Audit, Budget and Finance committee.

In October 2015, Zárate was sworn in as the first Alamo Colleges' trustee and the second Hispanic to chair the board of directors of the Association of Community College Trustees (ACCT). He will be only the second trustee from Texas to be elected chair. He was chosen as chair-elect by a unanimous vote in 2014 and will have served a one-year term before becoming chair. Zárate also served as vice chair of the ACCT board and as Western Region chair .

In January 2008, Governor Rick Perry named Zárate to the state's Task Force on Higher Education Incentive Funding, which made recommendations to the governor, lieutenant governor and speaker of the house regarding guidelines for implementing higher education incentive funding programs. Zárate also was a member of the Texas Higher Education Coordinating Board's Advisory Committee on Higher Education Cost Efficiencies. In his role as a trustee, Zárate has been called upon numerous times to testify before the state legislature regarding community college issues.

During his tenure on the board, the Alamo Colleges has achieved significant milestones in student success. These include increasing the number of degrees and certificates awarded to a record high of 9,700 degrees and certificates awarded in FY 2015. This is a 36% increase over the previous year and the second highest number achieved by any community college in Texas. Since he joined the board, the Alamo Colleges' many successes also have included: the addition of the Central Texas Technology Center in New Braunfels and the Greater Kerrville Center; the establishment of a successful training partnership with Toyota Motor Manufacturing, Texas; the passage of a $450 million capital improvement project to fund the building of Alamo Colleges – Northeast Lakeview College and the expansion of the four other Alamo Colleges; and the selection of Dr. Bruce Leslie as chancellor. Leslie begins his tenth year with the Alamo Colleges in November.

Zárate educational career included serving as the principal at Mary Hull Elementary School in the Northside School District (NISD) in San Antonio for 16 years. Under his guidance, Mary Hull Elementary was honored as a Texas Recognized School, a Commended Title I School, a Texas Blue Ribbon School and a National Blue Ribbon School. It also received the Hispanic Magazine Exemplary School Award in 1999.

Zárate's community involvement includes serving on the United Way Education Issues Council, the Alamo Colleges Foundation Board of Directors, the Greater Kerrville Education Advisory committee and the Council for Continuous Improvement and Innovation of the Texas Higher Education Coordinating Board.

Zárate holds a master's degree from San Diego State University and a bachelor's degree from Howard Payne College in Brownwood, Texas. He and his wife Jane Ann are the parents of a daughter and three sons.