The mission of the Scobee Education Center is to engage our students and community in life-changing experiences that inspire the pathways to STEAM careers.  (Science, Technology, Engineering, Arts, and Mathematics).

The Scobee Education Center at San Antonio College is dedicated to engaging our students and community in life-changing experiences that inspire the pathways to STEAM careers. The Center was established on the campus of San Antonio College in memory of the lives given by the seven crew members of the Space Shuttle Challenger/STS-51LL "Teacher in Space" mission.  Our goal is to carry on the crew's educational mission, to spark youth interest and joy in science and engineering.  The center is named after the Francis R. (Dick) Scobee family - Commander Scobee, his widow Dr. June Scobee Rodgers, and their children Kathie Scobee Fulgham and Maj. Gen. Richard W. Scobee.

Corporate Team Building for groups of 20-32 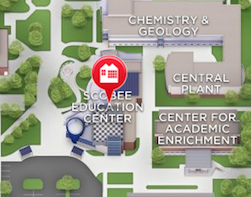